skip to main | skip to sidebar

One of our purposes at JOY biscuits is to increase awareness of therapy and service dog programs.

In this interview, Alison Etcheverry, a third grade teacher at Dianne Feinstein Elementary in San Francisco, talks about her therapy dog, Jack McCoy. 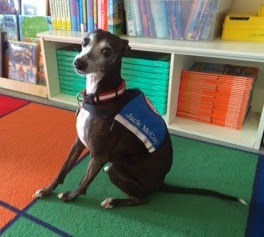 Jack is an active therapy dog for the San Francisco SPCA's Animal Assisted Therapy Program.  He's officially part of their "Puppy Dog Tales" program in select SF public schools.  This is the equivalent to being an Eagle Scout in the Boy Scouts!

1. When did you get Jack?  What’s the story behind his name?
I got Jack when he was 4 and a half months old.  He's from West Oakland, CA.
His full name is Jack McCoy.  He was named after the Sam Waterston character from Law & Order.  He stands for justice.  Plus, just like on the show, Jack is a real ladies man, has an extensive argyle sweater collection, and has the charming "salt and pepper" thing going on!

2. How did you know he would be a great therapy dog?

I knew right away!  I took him home the first day of summer vacation, so I spent the whole summer socializing him.  He was so good with kids in the neighborhood, in the park, wherever we went.  I knew right away I wanted to be able to bring him to my classroom.

3. What organization did you go through?  What was that process like?
We went through the SF SPCA Animal Assisted Therapy Program (AAT).  We had already done all the puppy training, then he had to pass a "temperament" exam.  Next, we did a 6-week course to qualify to be in the AAT program.  Finally, in order to qualify to come to schools, he had to pass the AKC Canine Good Citizen exam and do another training to become part of the "Puppy Dog Tales" program.  (He has all the official documents to prove it!)

4. Can you describe what type of therapy work you did together?  What type of facilities/organizations did you go to?
Jack has been a therapy dog for over 6 years now.  We started by going to rest homes/memory centers.  We visited several psychiatric units-UCSF, SF General and most often, the VA.  We also visited ICU's, especially for pediatrics.  Now, our only "official" visit is to Dianne Feinstein Elementary School every Friday.

5. What is your most vivid or favorite memory of how Jack interacts with his “clients”? 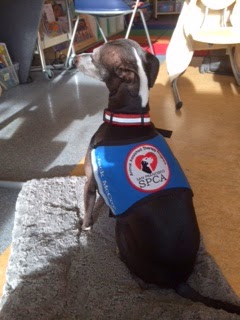 I've had a number of really amazing interactions, but a few really stand out.  The first was several years ago, at the Langley Porter Psychiatric unit.  One young man who didn't really engage with the group, lit up when Jack arrived.  When our visit was up, the guy got tears in his eyes and said, "I love Jack, please don't go."  I found out later from the nurse that that was the first time he'd come out of his shell.

Another more recent incident was Jack's interactions with a kiddo in the Special Day class.  A few months ago, I took Jack outside to go potty.  I noticed a little boy, new to our school, out front.  I could tell that he was agitated and looked like he might run away.  I started talking to him, and eventually, I convinced him to "show Jack his desk," and got him to come back inside, holding Jack's leash.  We've done that a few times now.  But the biggest changes are the kids at the beginning of the year who are "terrified" of Jack, and by the end, can't stay away from him.  He is a true healer!!

6. If you could give advice to someone who is thinking about making their dog a therapy dog, what would you tell them?
I think it is one of the most wonderful and rewarding things in my life!  I would say, although it is a lot of work, it's totally worth it!  It takes a lot of patience, but if you pay attention to your dog, they will show you the way.  I read something once that really encapsulated what it's all about: "Dogs are the bridge between children and adults."  Children really, really, really identify with him.  Jack helps me connect with my students in a deeper and more profound way, beyond words.  He's like a magician!  Kids will do stuff for/because of him that just wouldn't happen otherwise.  One last story:  I left Jack with another teacher a year or two ago.  She had a kid who would only sit still for minutes at a time.  She told me that every time the boy got up she'd say "Jack needs you to sit down & do your work," and he did it!!  She said he did more work that day than any other! 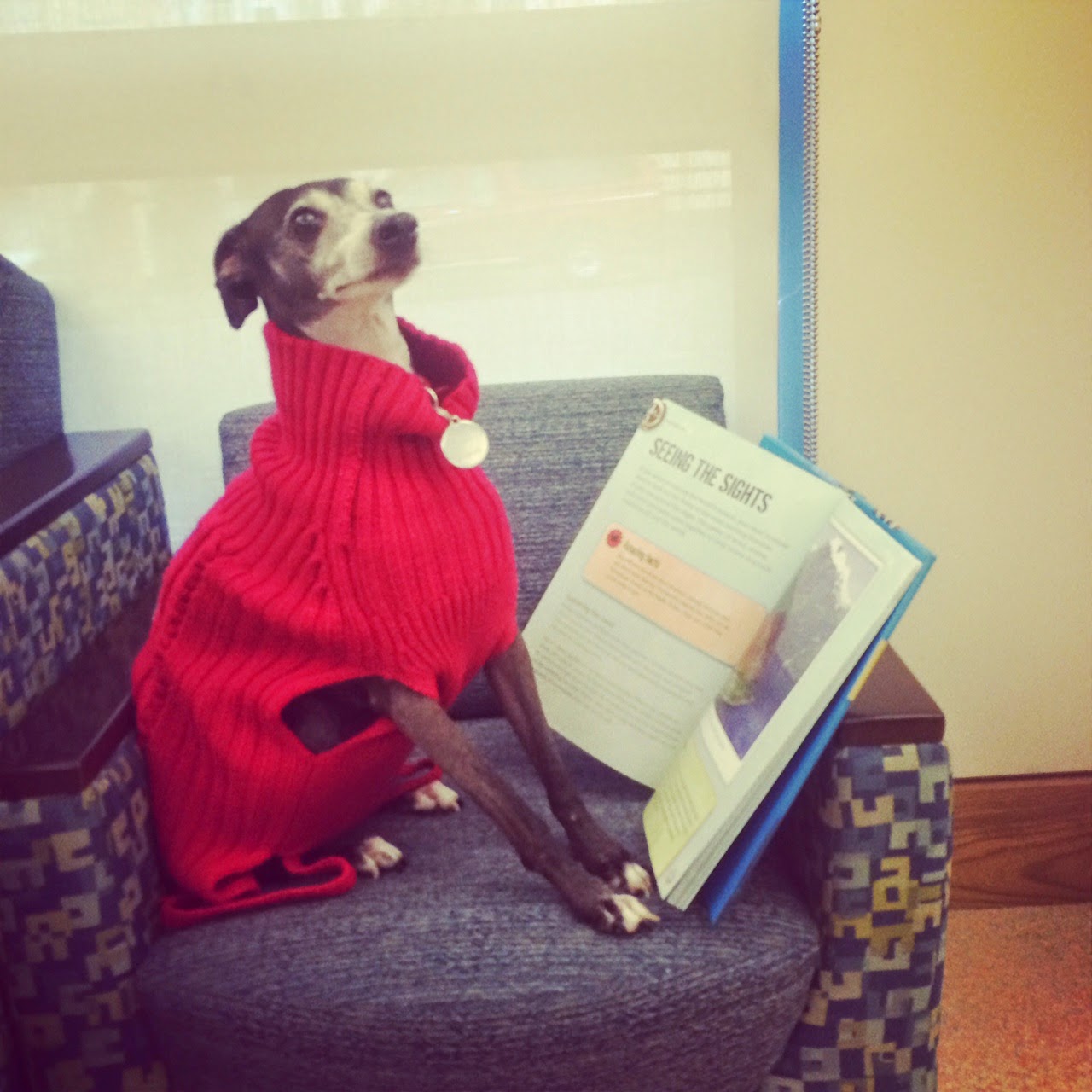 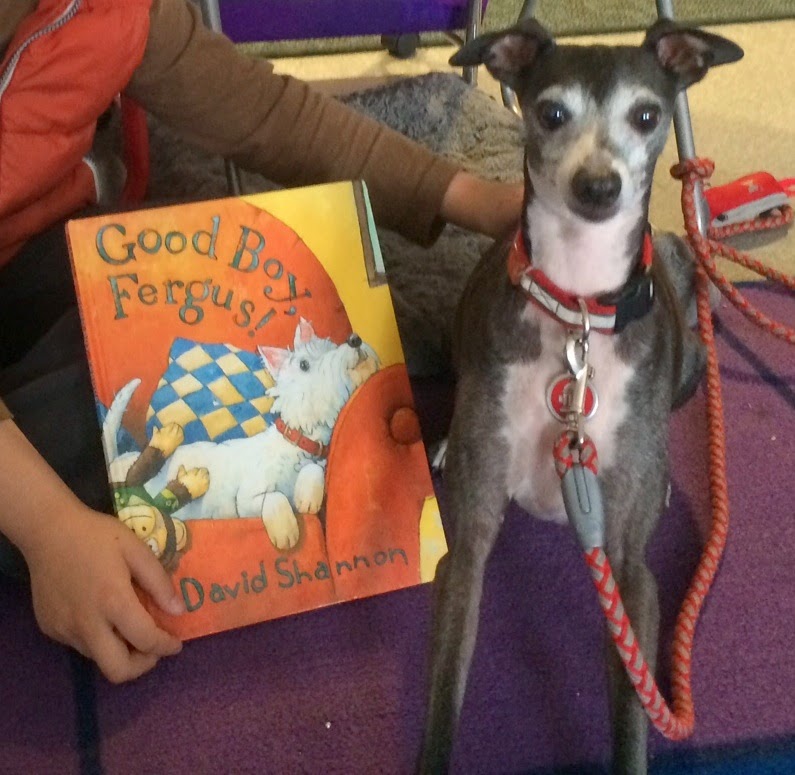 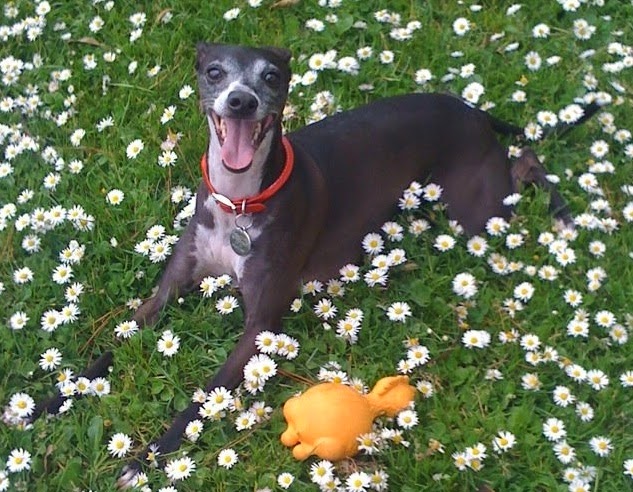 Jack is an Italian Greyhound and is 8 years old.  His favorite activity is running through the grass and chasing his red ball!

Thank you for reading!
Posted by JOY at 4:34 PM No comments:

flavors with a purpose...all natural dog biscuits that target aspects of dog health

welcome to the JOY biscuits blog! here you will find updates on the "special ingredients" that make JOY biscuits love at first bite.

our mission is to create a purposeful and natural dog treat for your furry friends. we value the properties of wholesome, locally-sourced, and organic ingredients, therefore providing our supporters with a sustainable dog treat.

please feel free to explore and don't forget to visit our website at www.joybiscuits.com

for more information, questions, comments, or suggestions contact us at: joy@joybiscuits.com

JOY
actually, this was our first dog CHAMP. he was the inspiration behind JOY biscuits! he was also the first dog in the R&D pack that got to taste a JOY biscuit once one had cooled off. we had been wanting to adopt a rescued racer for several years and finally did it!